Our Greenlandic colleague, Akaraaq, from the ‘Arctic Station’ in Qeqertarsuaq, guided us to Fortuna Bay, the perfect setting for testing potential effects of kelp forests on O2-concentratons and pH.

Along the open coastline of the Disko Bay the huge drifting icebergs may scratch the rocky shores and prevent the establishment of continuous kelp forests. But our Greenlandic colleague, Akaraaq, from the ‘Arctic Station’ in Qeqertarsuaq, guided us to Fortuna Bay (see photo) where an extensive kelp forest flourished as the bay was protected from icebergs by guarding rocks at the bay entrance. This site provided the perfect setting for testing potential effects of kelp forests on O2-concentratons and pH in the bay. Our initial results show that the high productivity of the kelps maintained the water column super-saturated with oxygen and created high pH levels throughout the extended diurnal cycle of the Arctic midsummer. These results support the hypothesis that kelp forests may serve an ecological function as favorable habitats for calcifying organisms. This refuge with high pH will expand in the warmer future, as kelp forrests expand and risks of ocean acidification increase. Bladder wrack in tidal pools created similarly favorable conditions for calcifyers such as blue mussel, which happily recruited in this specialized habitat. 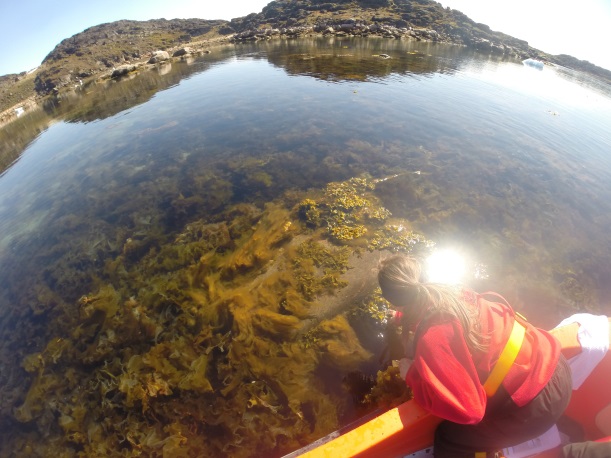 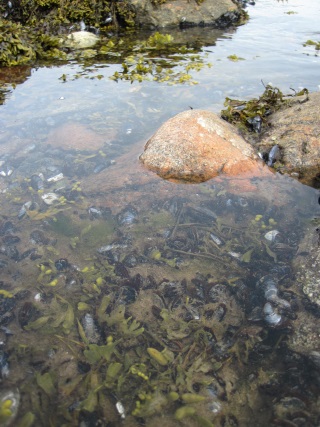 The dense kelp forests likely serve several additional functions and services to society. Whenever we visited Fortuna Bay, we met local fishermen in small boats fishing huge cod (> 1 m in length) just in front of the kelp forest. And there may be a connection between kelp and cod abundance, as studies elsewhere demonstrate that kelps can serve as a refuge for cod fry protecting them from being cannibalized by larger adults. The anticipated expansion of kelps in a warmer future Arctic with less sea-ice cover and fewer icebergs may therefore prove beneficial for coastal fishery.

Ecological functions and services of kelps are not yet widely acknowledged by the local community but are probably about to be rediscovered. In spite of the general shortage of vegetables at these latitudes, use of kelp as food in Greenland seems to be sporadic or at least forgotten for half a century. Among the people we met, only the grandparent generation confirmed that they had used kelp as food when they were young, but mostly when nothing else was available or occasionally to add flavor to fish soups. Probably the increasingly well-assorted supermarkets have reduced the interest for this local ingredient during the last decades. However, the interest in kelp is now increasing. We had the opportunity to meet and discuss with representatives from the local municipality, Qaasuitsup commune, who were highly interested in potential uses of kelp for food, pharmaceutics, energy etc. and wanted information about our project (Photo 3). We exchanged knowledge and they informed us that indeed fishermen in a neighboring fjord system were aware that drifting kelp carried cod larvae. They also explained that they were doing initial surveys of the potential for kelp production and use in their municipality. The reader should not that this is not just any municipality, but  it happens to be the most extended and northernmost municipality of the world, covering 660.000 km² and encompassing about 18.000 inhabitants scattered across this huge territory. 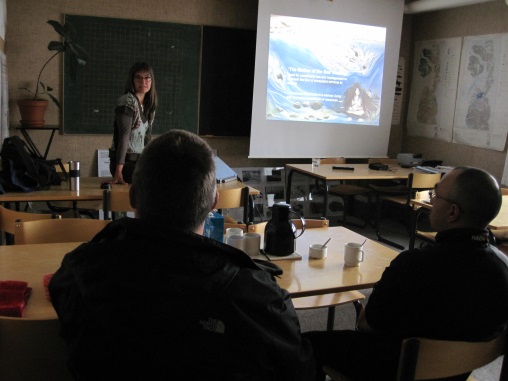 Meeting with representatives from the local municipality, Qaasuitsup commune, to brief them on the project and exchange ideas on the prospective future uses of kelp in Greenland.  Photo Carlos Duarte.