Remote Sensing of Sea Ice in the Canadian Arctic

Remote Sensing of Sea Ice in the Canadian Arctic

I have spent the last month in an ice camp in the Canadian Arctic near Cambridge Bay, Nunavut conducting a research experiment on snow-covered sea ice, as a member of the ASP Cambridge Bay field campaign.  Even though I had conducted research in the Arctic before (onboard the Canadian research icebreaker CCGS Amundsen) this field project was very special research and personal experience for me. In the field we stayed in a hunter’s cabin with a great view at the frozen ocean! The experimental site was located on the ice ~6 km away from the cabin; so, we drove there by a snow mobile. Everyone who lived in the cabin had to do different chores which included cooking, collecting snow for washing dishes, filling up and running a power generator, keeping the diesel furnace running, and feeding our cabin husky dog Junior! Quite a different working environment than on the Amundsen!

My research is focused on detection of different properties of snow and ice using radar remote sensing. This type of work is particularly important to better understand ongoing drastic changes in the Arctic sea ice. Canadian satellite radar platform RADARSAT-2 is able to monitor the Arctic during day and night time. To develop more efficient detection algorithms (from RADARSAT-2 images) we use an instrument called scatterometer which has similar characteristics to RADARSAT-2. This instrument sends a microwave signal towards the sea ice surface and then it receives and measures the reflected portion of the signal travelled back to the antenna. 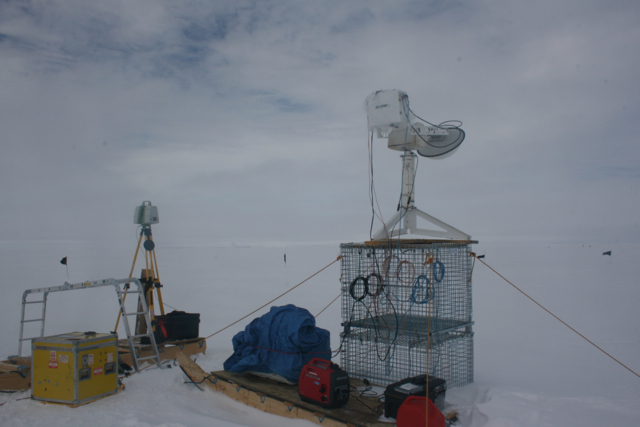 The main goal of my field program was to collect (and then model) time-series scatterometer measurements over snow-covered sea ice during the seasonal transition from cold to warm temperatures. For this type of experiment, the ice camp setup is ideal because electromagnetic and physical parameters of snow and ice can be monitored at a fixed location a few times a day or even continuously. This is obviously not possible to do on the ship that changes location very quickly.

However, to successfully conduct a field project in an ice camp, many things have to be considered and well thought in advance. For example, for accurate radar measurements it was extremely important to put up the instrument at a certain height above the surface. Thus, I and my colleague Nari Firoozy (having an initial idea from Vlad Petrusevich) had to specifically design and build a reliable (yet simple) platform suitable for the Arctic harsh environment. One night our cabin was shaking from a snow storm, and I was really worried about the instrument sitting on the platform. When I and Nari drove to the site on the next day, we were very happy to find out that the platform was absolutely fine, and the antenna on the instrument did not move at all. Later, I found that the meteorological station close to our site registered 80 km/h wind speeds! It was so great to know, that our platform was perfectly designed for the Arctic conditions!

Despite the fact that Nari and I had to spend quite a bit of time troubleshooting the instrument, a high quality time-series dataset was eventually collected! The radar system continuously monitored whatever happened in the snow and ice – in the first half of the experiment there were stable conditions and regular diurnal changes, and in the second half we got very significant variations in the distribution of water content in the snow cover (and as a result, great variations in the radar signal over time). 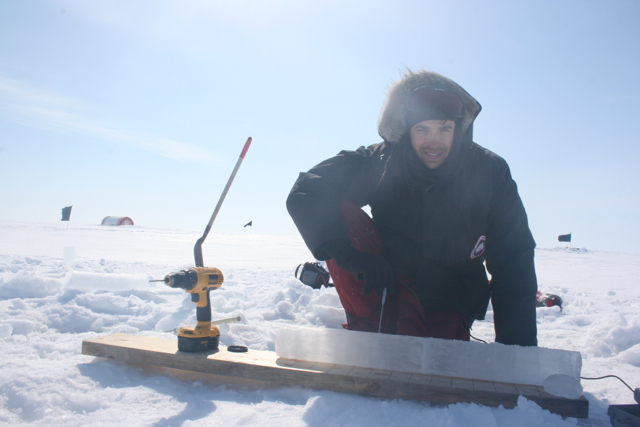 It was very exciting to come back home to the south, to warm and green Winnipeg. However, after a couple of weeks, I start missing the spirit of the Arctic field research and already look forward to coming back!

If you would like to learn more about my work see: